I’m so righteous when I drive. I listen to Christian radio and sing along. Sometimes I even become emotionally moved by the words. I mean I need a halo or wings or something in recognition of my superior spirituality – until someone cuts me off or goes too slow. Then the halo goes flying off and the unholy words go flying out. Can you relate?

Sometimes I think if I listen to or read spiritual words somehow I’ll absorb holiness. If only it worked that way – I’d be Mother Teresa. It’s time for some transparency: I’ve paid attention to my thoughts hidden behind my “I’m ok – everything’s ok” exterior. For example, while driving with my kids one day, we got behind a car going 15 mph under the speed limit. I growled a little outwardly. Inwardly I said things like “Get the H*** out of my way.” I wasn’t even in a hurry.

Driving is just one area in which I struggle with my thoughts. Sporting events are another. At my daughter’s cheer competitions you’d think that I’m calm and possibly even laid back. I sit back in my chair, smile, cheer and clap. But let there be an unfair score sheet and the inside of me ignites to full blown indignation. And, I hate to even admit this people, but a small part of me says “YES!” inside when our competitor’s team makes a mistake…I know…it’s a sickness…

What about our thoughts about our kids? Ooh. I’ll tread carefully here. Do you ever think your kids are ungrateful, entitled little monsters? Do you ever wonder what life would be like if you had bypassed parenting and just opted for goldfish? No? Good. Me either. Moving on…

My point is what we think about affects how we act. Every sin begins as a thought. Every single one. So I need to get back in the habit of taking every thought captive. It sounds difficult, and it is at first, but the more I recognize my thought pattern, the easier it will be to stop it in its tracks. It requires intentionality and purposeful decision-making, but I promise it helps to have those boundaries when temptation comes.

I’m trying to live as if every one of my thoughts could be heard by the masses. If I was exposed from the inside out, there certainly wouldn’t be perfection, but would it convey how much I truly love people, or would my toxic thoughts overshadow? I’m aiming for the former. I can’t promise I won’t make hollow death threats during sporting events, but I can promise I’ll recognize I’m crazy and tell myself to get a grip. 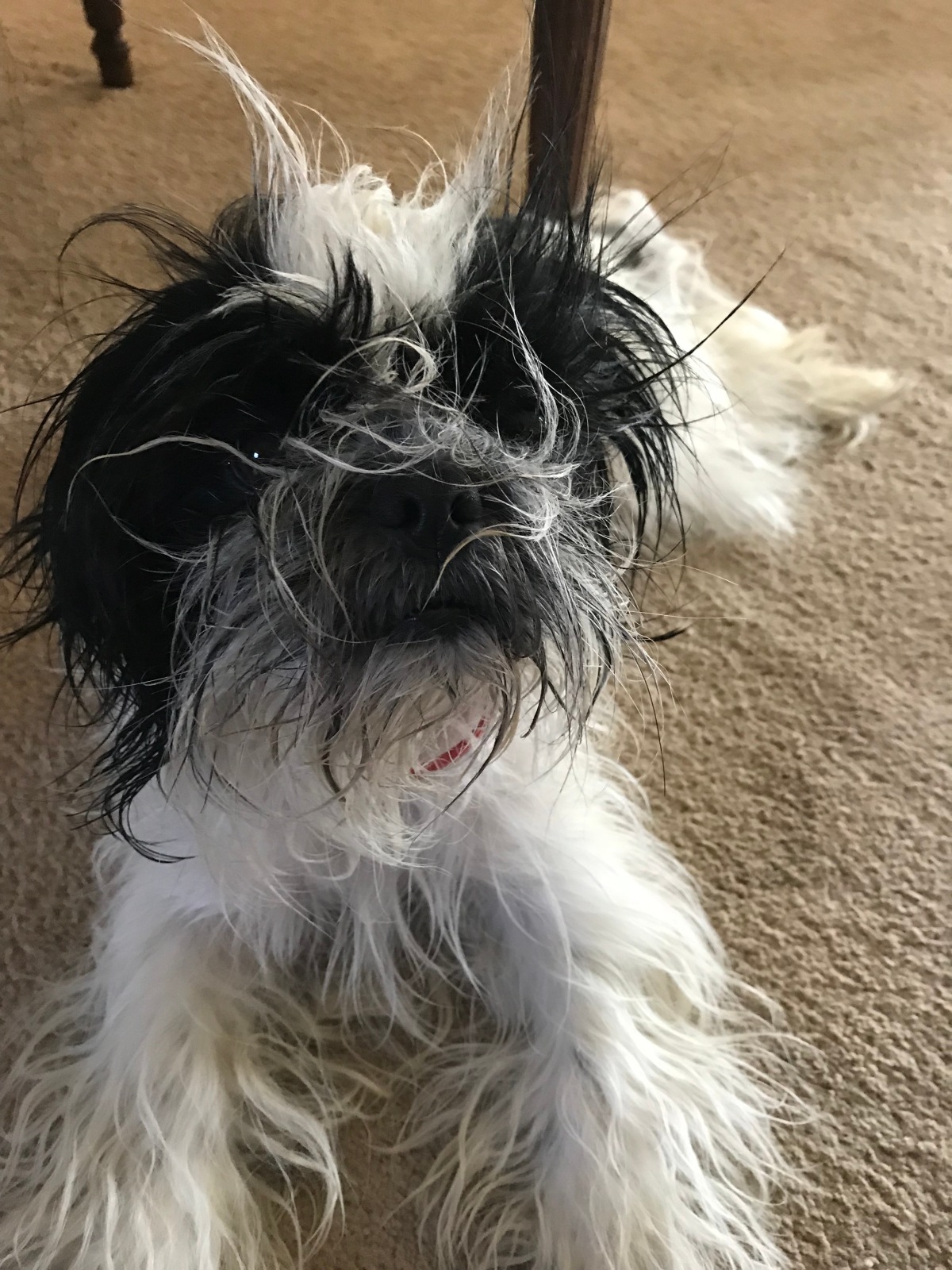 August 25, 2013: Friday I had to take our dog and kitten to the vet. I thought it would be a great idea to just hold the kitten on my lap and drive there without a way to contain her. I had a box, but it was from a beer distributor. My other idea was a backpack, but then I worried someone might be offended if my backpack was meowing. In retrospect, I don’t particularly care what anyone may have thought. Holding an uncontained cat in your lap while driving in the rain borders on stupidity.

She was fine at first, but then it began to rain. So I turned on the windshield wipers and that was the beginning of the end. Apparently, windshield wipers are terrifying, because every time they wiped, she clawed her way further and further up my shirt until she was over my shoulder. The only part of her I had a grip on was her back hips. She dug in to my flesh with her tiny razor sharp claws and I ran off the road. If any of you were on the road while this was occurring, I apologize. I wasn’t drinking. Just bleeding.

When I arrived at the vet’s office, I had to calculate how I would get both the cat and the dog successfully to the waiting room. Luckily for me, I still had Avery’s fall jacket in there from last year, so I opened the van door and captured the kitten, wrapping her up like a mummy while I grabbed the dog’s leash. When we got inside the cat had shimmied her way up my collarbone and the dog had walked around my legs three times rendering me immobile. I was slightly more than mildly irritated when the vet noticed how dumb I am, came to my rescue and loaned me a cat carrier.

That one tool made the whole event go smoothly from that point forward. And it made me think. I can’t even successfully handle a dog and a cat without help. What makes me think parenting is any different? Sometimes I feel like I can handle it all myself. There are times when I’ve needed help and refused to ask. There have been times friends have offered to help but I like my way better, or I don’t want to seem needy (or worse…weak) so I refuse. Then something so far out of my plan happened and I had a choice: turn to my friends for help or sacrifice my kid’s best interest because I was terrified people would see my inadequacies.

We were not made to be afraid of authenticity – quite the opposite is true actually; we are made for relationship. Social media has the power to make everyone feel like complete failures, and there is a stigma to so many problems that makes being real very risky. But slinking away from an issue does not make it any less an issue. Many times the denial complicates the problem by refusing to address it at its core.

So while I am certainly no expert in absolutely anything, one thing I know is that we are better together. The smiles on Facebook may not be a lie, but they do not tell a complete story. Everyone needs support. Literally everyone. I invite you to be part of my journey, where I will celebrate God, make fun of my children and maybe expose some of my deepest insufficiencies. Why? Because we are ALL inadequate and none of us is immune from adversity, but it is nucking futs to try to do this life alone.

Many years ago in the heart of autumn, I was driving down a beautiful West Virginia road; the grass was still green, the leaves on the trees vibrantly yellow, red and orange accentuated against a crisp blue sky punctuated with brilliantly white cumulus clouds. Ahead I could see a small white church and in front a sign with familiar black lettering asking for roasted peanuts.

I pondered this strange request for at least several seconds. It went something like this: Why would they need peanuts? Why do they have to be roasted? Are there elephants living here that I don’t know about? Why don’t I know about them? I need to see these elephants…

As I approached the sign I could see clearly that it read, Needed: Foster Parents. Aside from realizing I didn’t have my glasses because I “didn’t need them”, I just laughed at my mistaken conclusion and promised myself I would go to the zoo and see elephants soon.

It wasn’t until a few years later that God brought this memory back in a whole new way to illustrate my denial on a much larger scale. In what I inaccurately believed to be my darkest hour, He was trying to show me that I had been driving through my life without corrective lenses that I undeniably needed, drawing conclusions based on an illusion fed by naïve, adamant, and devastatingly misguided pride.

I try not to dwell on what could have been if I would have been more obedient earlier. Instead I stand amazed at how God has brought me through each of my valleys stronger and more ready each day to say, “your will, not mine”. My corrected vision is far from 20/20, but I drew a line in the sand, and I stand on the side of Christ.

Thanks for joining me!